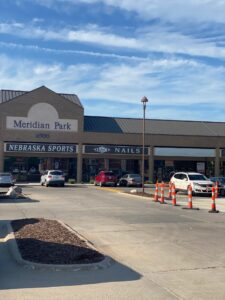 A new retail store for Lincoln Formal Dress Boutique will be open soon.

To be honest, I wasn’t planning on re-opening a store. My plan was to operate the business online only. That changed after this year’s prom season. Yes it was a small, unusual season, but I still provided plenty of dresses for high school girls for their big dance. The girls came to the place where I am storing the dresses to pick out their favorite. This told me that most people looking for a dress don’t want to pick them out from a photo. They want to see them in person. They want to touch them, determine the quality, try them on.

So I began looking for a new retail store. Thanks to my friend Cathy Kottwitz of Guide Rock Commercial Real Estate, I settled on a space at Meridian Park at 70th and O streets in Lincoln. This is not too far from the space I had previously at Gateway Mall. It’s just down the street. It’s centrally located with good visibility. The sign (not up yet) will be visible from the busy nearby intersection.

The new store will be a little bigger than the last one – which is good because I have a lot more dresses.

When will it open? That is yet to be determined. The store needs some remodeling done, and a building permit needs to be applied for. This all takes time. The people in charge say it will be a few months yet before I can take possession. So while I was hoping and planning to be open by Homecoming season, there’s a good chance that will not happen. Right now they are telling me October, but I’m hoping it will be sooner than that.

The new Lincoln Formal Dress Boutique is something to look forward to. Next prom season the boutique will be in full swing and open to serve its customers.